The marionette theatre is a composite of craft – art and dramatic elements which attracted us very much. We strive to include these elements equally in our performances 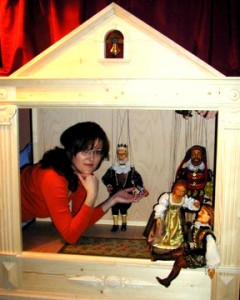 Original Renaissance music accompanies us through the story interpreted by Juraj Korec and Ivan Čermák which even more induces the period atmosphere of a royal court.

The theatre is inspired by historical / marionette theatres, a task of which was to educate children and teach them in a discreet manner to listen to serious music.

As early as in the 18th century they prepared their children for the opera world by means of light genres, e.g., “The Magic Flute” by the world-renowned Austrian composer W. A. Mozart was played.

Our aim is to get children in touch with period music which they cannot normally hear on radio or television. By combining music with images – everything in a Renaissance style – our aim is to ensure that in the future the children will be able to associate this music and costumes with the given period.